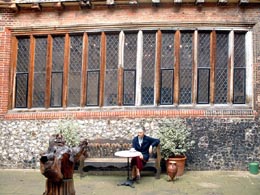 The first owner, Edmund Wood, was a wealthy merchant grocer who became Sheriff, then Mayor of Norwich in 1548. His son Robert was also Mayor, and in 1578 he received Queen Elizabeth I when she visited Norwich, entertaining her to “a Loyal Latin Oration”, in return for which she knighted him.

The next known owner, Thomas Toft, was also a grocer and Mayor (1654), of extreme Puritan views, and took an active part in the destruction of statues and “superstitious pictures and reliques of idolatry” in churches and in the Bishop’s palace.
kviklån
During the 18th century, the dwelling was split into shops, and in 1801, the Bull Inn can be found at No.11; later, we find a grocer, a saddler and a bootmaker.

Finally, in the last quarter of the 20th century, the street frontage was occupied by 3 shops, the upper level by small flats, and the whole in a dilapidated condition.