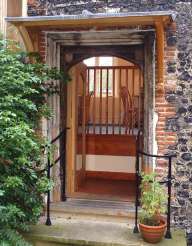 The King of Hearts occupies a remarkable Tudor merchant’s house dating back to the 15th and early 16th century. A major restoration project took place between 1986 and 1990, undertaken by Norwich Preservation Trust with the support of English Heritage. chwilówki online bez krd

The architect, John Sennitt, won a Civic Award for the project.

The building comprises two halls, one above the other, and an inner courtyard, each with many features of interest. The ground floor hall, which serves as the Art Gallery, has a beamed ceiling in a star-shaped pattern and a very long mullioned window; in the upstairs hall, used as a Music Room, a painted ceiling with moulded beams was revealed underneath Georgian plaster. More interesting features were found as the restoration proceeded: two fireplaces, and in the courtyard, a high mullioned window and a carved and painted arch.